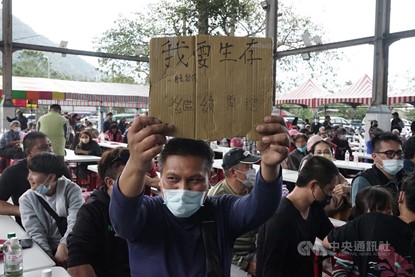 A voter in favor of extending the mining rights of Asia Cement Corp. holds up a placard reading "I want to survive." CNA photo Feb. 12, 2022

Taipei, Feb. 12 (CNA) An Indigenous community in Hualien voted overwhelmingly Saturday in favor of extending the mining rights of Asia Cement Corp. in the county's Xincheng Township.
Those who opposed the mining rights, however, said that the poll did not adhere to legal procedure, and they would continue to fight against marble mining in the area by Asia Cement.
The Indigenous community of Bsngan, which comprises six smaller neighborhoods located near the mining site, responded by saying that the proper procedures were observed, as 294 households voted for the mining extension, while 45 households voted against it, which was way past the required minimum 50 percent majority.
Voter turnout was also more than the stipulated 50 percent, with 374 of the 555 Bsngan households participating, according to Chang Wen-sheng (張文盛), chairman of the Bsngan community group that negotiates with Asia Cement.
The vote on an extension of Asian Cement's mining rights in Xincheng was held after the company entered into negotiations with the Indigenous residents and promised to share the benefits of the mining operations with them. 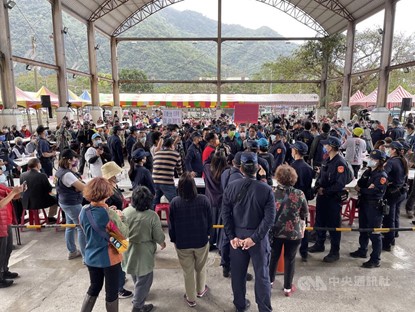 Asia Cement first secured mining rights in Xincheng from the Ministry of Economic Affairs (MOEA) in 1973, and those rights were extended in 2017 for another 20 years.
In September 2021, however, the Supreme Administrative Court upheld a lower ruling, revoking the company's mining rights in the area, in a case that was brought by Indigenous residents.
According to the Supreme Administration Court, Asia Cement failed to abide by the Status Act for Indigenous peoples by not consulting with Indigenous residents in Xincheng, who make up one third of the township's population.
After the ruling, Asia Cement kicked off intensive negotiations with the Indigenous residents in the township, and the results of Saturday's vote now paves the way for the company to file a new application with the MOEA for the extension of its mining rights.
Those who voted against Asia Cement on Saturday said that Chang had misled the people into thinking that the vote was about approval of the promises made by the company instead of an extension of its mining rights. 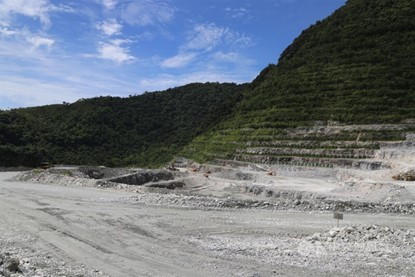 Asia Cement's promises to the Indigenous residents of the area included subsidies for electricity bills, employment assistance, monetary gifts for the elders, and shopping vouchers for the Lunar New Year, Dragon Boat Festival and Mid-Autumn Festival holidays.
Commenting on the poll results, MOEA expressed gratitude to the Indigenous people of Xincheng for supporting the mining rights extension, which it said will help advance Taiwan's economic development.
Saturday's vote was a demonstration of a tribal autonomy, the MOEA said, adding that it will work to help create a balance between that concept and industrial development.
(By Chang Chi, Liang Pei-chi and Frances Huang)